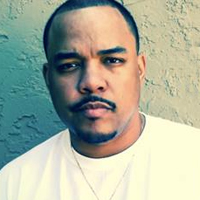 Born Alishonn Bonnett in Grand Rapids, Michigan, acclaimed producer, singer,songwriter, Moox has been making music for over 20 years. Also a talented artist, he works as a graphic designer for businesses, restaurants and individuals.

Early in his career, in 1995 Moox moved to California to follow his dream of making it in the music business. Since then he has worked in different parts of the country; eventually settling in the Music Capital of the world, Austin, TX.

“I’ve had a passion for music for as long as I can remember,” says Moox (derived from
childhood nickname, Mookie). “I was influenced by so many artists and producers;
everyone from Michael Jackson to Parliament, Babyface to Dr.Dre, and Boys II Men to
the Kumbia Kings.”

With such a broad base of influence, it became possible for Moox to create all types of
music. He inherited the love for percussion from his dad, who played with a local band.
Moox remembers banging on paint cans, buckets – anything that would make a sound.
In middle school, he began playing a keyboard and when a group asked him to sing
with their band, he discovered he had talent. So he kept practicing.

When Moox was in high school, the father of a friend took an interest in his musical
ability. “George Hamilton took a real interest in me. He bought studio equipment for me to develop my skills and taught me a lot about singing, songwriting, and producing. He
sorta handed the torch of his dreams to me.”

While most of his friends were out doing what teens do, Moox was in a basement every
day, glued to that equipment. He was excited to create music. Around that same time
Moox connected with radio program director and artist manager, Lee Cadena, who
opened the young musician’s eyes to yet another side of the music business. George
passed and Moox, who was now a part of the Cadena family, moved with them to California.

From that point on, for Moox it was a new journey of success thru the music industry. He’s had the pleasure of producing both local and well-known artists such as Teena Marie, Chris
Brown, Nelly, Chamillionaire, Baby Bash and Lil’ Rob, to name a few. Today he owns
his own music production/graphic design company, Mooxworx.com. He is also the resident mixologist for the “Lowrider Oldies Show” with Lee Cadena.

“I truly feel I have been blessed to have seen and accomplished so much. There has
always been someone there to guide me away from trouble and down the right path,
which for me, what I believe were my God-given talents: music and art.”